Just like the flower she’s named after, Daisy Mae is known to bring smiles to anyone who meets her. At 9 years old, she is the youngest child in her family, living in the Canapnapan district in the Philippines. People witness her fun-loving spirit when she plays hide and seek or tag. And she laughs especially loud when she is splashing around in the rain.

Despite Daisy Mae’s outward demeanor, life has been hard for her family.

Her dad is a carpenter. During good times, which are becoming increasingly rare, her dad will work enough to bring home about $30 a week. Other weeks, her dad may not be able to find any jobs, and he brings home nothing. When that happens, the family suffers. Her parents barely have enough to feed the entire family, and they can’t afford anything extra.

“It’s very difficult. There are times that we eat very late, and we also don’t have school necessities such as bags and papers,” said Daisy Mae. 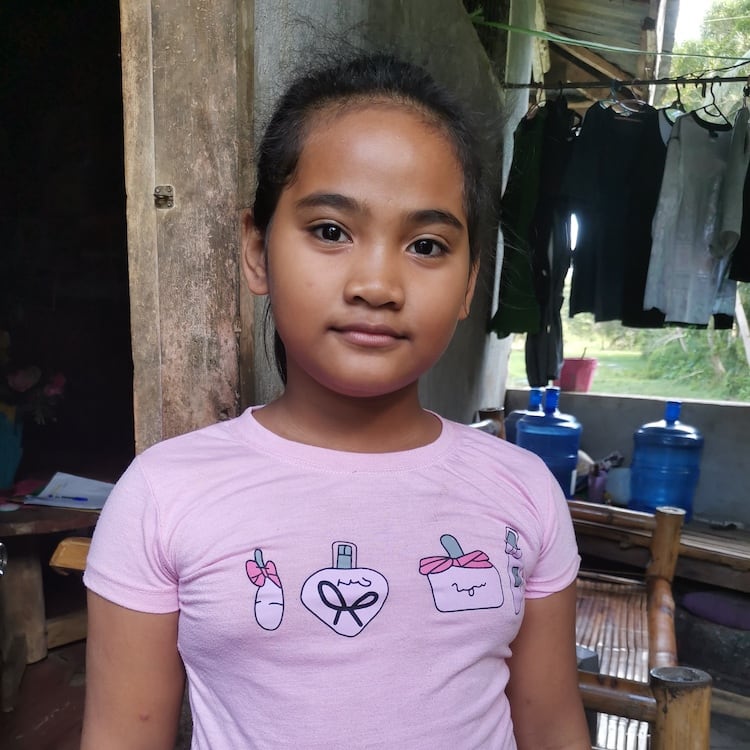 Her mother admits to stretching their food so that all of her kids have something to eat, but she knows it is not enough to help her children grow up strong and have energy for school.

Even when times are hard and there’s not a lot to eat, Daisy loves going to school. She’s in fourth grade, and there are days when the path to her schoolhouse is muddy and almost washed out. It keeps some children home, but not this determined little girl. She doesn’t mind getting a little dirty if it means spending time learning something new.

When Feed the Children came into the community, school became even more exciting for Daisy and her classmates. Generous donors have made it possible for the children to get a nutritious meal every day, school supplies and more. The program even offers a special surprise around the holidays that Daisy Mae looks forward to all year.

“I like going to school because of Feed the Children. They give us many things like bags, notebooks, pencils, and shoes. I am also excited and happy during the Christmas party because of the many games and foods.”

Community members and Daisy’s parents say being included in Feed the Children’s program has made them feel important and needed—and that it has given them hope for a better future.

For Daisy Mae, the program has not only brought a smile to her face but allowed her to dream big. Daisy has decided that one day she wants to be a nurse to help others, just like Feed the Children’s donors have helped her.

The Blessing of a Second Chance